As we know,SMT reflow oven is the most important soldering technology in surface mount technology. It has been widely used in many industries that need to produce PCB, which is including mobile phones, computers, automotive electronics, control circuits, communications, LED lighting and many other industries. More and more electronic devices are converted from through hole to surface mount, and reflow oven  replaces wave  soldering is a obvious  trend in soldring industry. 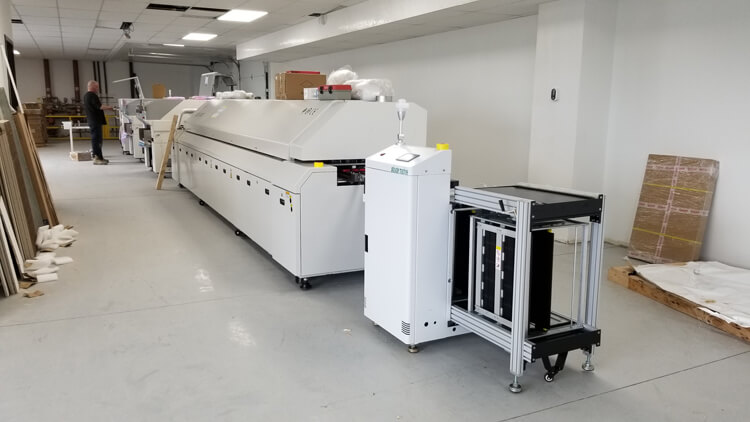 So what is the role of reflow oven equipment in the increasingly mature lead-free SMT process? Let’s take a look at the whole SMT surface mount line:

The whole SMT surface mounting line consists of three parts, such as steel mesh solder paste printing machine(also called SMT stencil printer), SMT pick and place machine and reflow oven furnace. For the machine, and compared with lead free, and no new demands on the equipment itself; for screen printing machine, and a lead-free solder paste in the physical properties there are some differences, so put forward some improvement on the device itself,for SMT pick and place machine, the process of lead and lead free is nearly same, but there is no qualitative change. the key of lead-free  is  in the reflow oven.

The lead paste (Sn63Pb37) melting point of 183 degrees, if you want to form a good weld must have the thickness of 0.5-3.5um intermetallic compounds in soldering, intermetallic compound formation temperature is above the melting point of 10-15, the lead soldering is 195-200. The maximum withstand temperature of the electronic device on the circuit board is generally 240 degrees. Therefore, for lead soldering, the ideal soldering process window is 195-240 degrees.

PREVIOUS：How do I identify SMD components?NEXT：How To Set Profile In SMT Reflow Oven